The Fighting Days - A Historic Drama 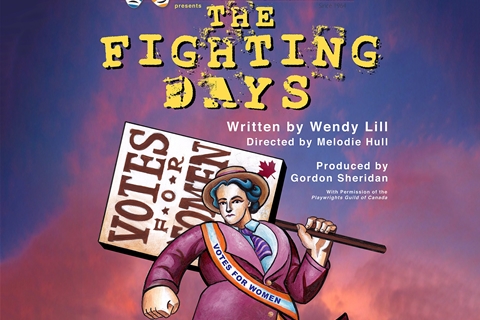 The story is of real life suffragette Francis Marion Beynon, played by Jelena Jensen. Newly released from her religious father’s tyranny and off to the big city of Winnipeg to live with her sister Lily, portrayed by newcomer Allison Platt, Francis experiences all of the new century’s limitations while the drums of war slowly increase volume.

Not loud enough to drown out the cries of EQUALITY, DEMOCRACY and VOTES FOR WOMEN screamed passionately by Francis’ close friend and suffragette Nellie McClung. Candice Fisk has the daunting role of bringing this Canadian icon to the spotlight. While the only male role in the play, the traditional newspaperman and Francis’ nemesis/love interest McNair, is brought to life with humour and the values of the time by Nathaniel Leigh.

The cast is rounded out by six more talented ladies portraying prairie women of the time, whose performances move us with first-hand knowledge of the hardships our foremothers endured to create this country.

Send The Fighting Days - A Historic Drama a Message