Scattered around Cranbrook are several historic cemeteries that hold the remains of many of the region's earliest and most colourful characters. If you have a day, or a couple of afternoons, take some time to wander through these fascinating glimpses into the past. Here are some of the nearby cemeteries of interest and their most famous occupants.

[Conrad Kain - 1884 to 1934] The legendary mountaineer, Conrad Kain died in 1934 at the St Eugene Hospital in Cranbrook, at the relatively young age of 50. Kain was a certified Austrian mountain guide and climber, who became the official guide for the Alpine Club of Canada. He had some 60 to 70 first ascents credited to him, which included the first ascent of Mt. Robson, the highest peak in the Rockies.

Some say Conrad Kain died of a broken heart, as his wife Henriquita (Hetta) had passed away a year earlier. Henriquita lies in a grave some 300 yards or more from her husband, she being buried in the Catholic section of the cemetery and Conrad being buried in the Protestant section. A large granite stone and memorial plaque were erected by the Alpine Club of Canada at his graveside in the Cranbrook cemetery. It simply reads, “A Guide of Great Spirit - Mt Robson 1913.”

The first murder on the Wild Horse was that of Tommy Walker, who got into a gunfight with a nasty character by the name of “Yeast Powder” Bill Burmeister. Burmeister had his thumb shot off in the fracas. After a hastily called trial “Yeast Powder Bill” was tried, but not convicted. He was, however, banished from the Wild Horse and given two hours to 'get out of town.'

Tommy Walker was born in Donegal, Ireland and died on the banks of Wild Horse Creek on August 6, 1864, at the age of 27. This is a facsimile of the original headboard that stood on Tommy Walker's grave (the original is at Fort Steele Heritage Town).

Many years later, Mr. Egge, longtime postmaster at Fort Steele, was successful in tracing and establishing contact with the descendants of Tommy Walker's family in Donegal, Ireland. They were most grateful as all traces of Tommy Walker had been lost when he landed in North America. His father had twice crossed the Atlantic ocean, coming to New York in an effort to find some news of Tommy. Each time he returned to Ireland empty-handed, with no trace of his murdered son. 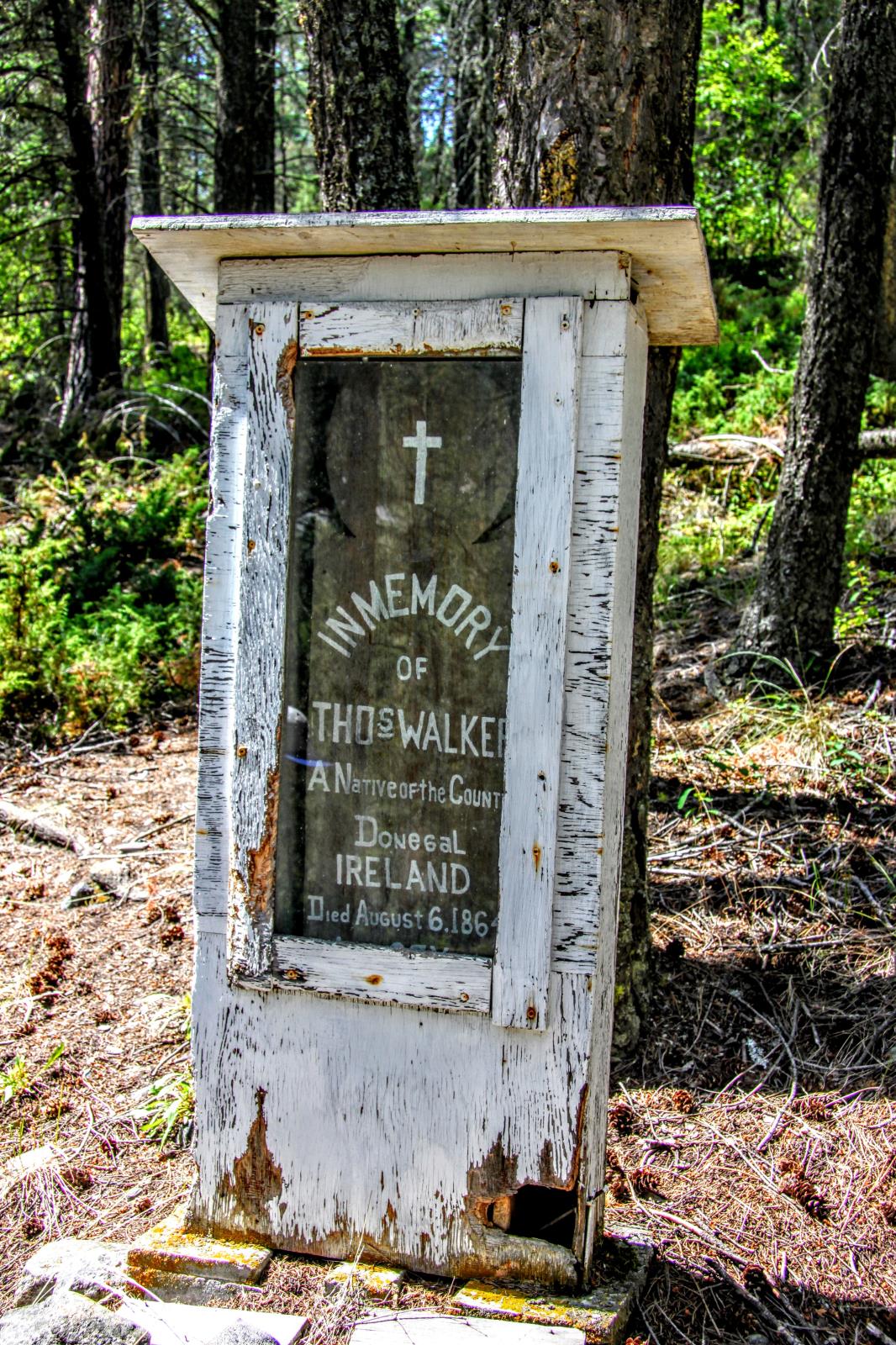 The Wild Horse or Fisherville cemetery dates back to the 1860’s. It contains 20 unnamed graves of the pioneers and prospects who didn't survive the gold rush on Wild Horse Creek.

According to the book, ‘This is British Columbia’, “When men died along those creeks they were buried by their companions who may have been rough, but still had hearts of gold. When they pulled out they left twenty graves in two neat rows in the Wild Horse cemetery.”

The second Kootenay Gold Commissioner, John Boles Gaggin, and BC Provincial Police Constable, Jack Lawson, both died on May 27, 1867. The two men lie buried side-by-side at the Wild Horse cemetery. Gaggin reportedly had been ill, and was known for excesses with alcohol. It was said that he dropped dead upon hearing of the murder of the Kootenay District's Constable, Jack Lawson. Lawson had been shot in the head near Bonners Ferry, Idaho when he was endeavoring to arrest a horse thief.

A group of local civic-minded citizens rallied in 1953 to preserve this old cemetery. Another group came together in the 1980's to fix up the decaying graveyard.

By the looks of the sagging rails, rickety gate, weathered sign and leaning grave markers, it is definitely time for another attempt at preserving this important part of Kootenay history. 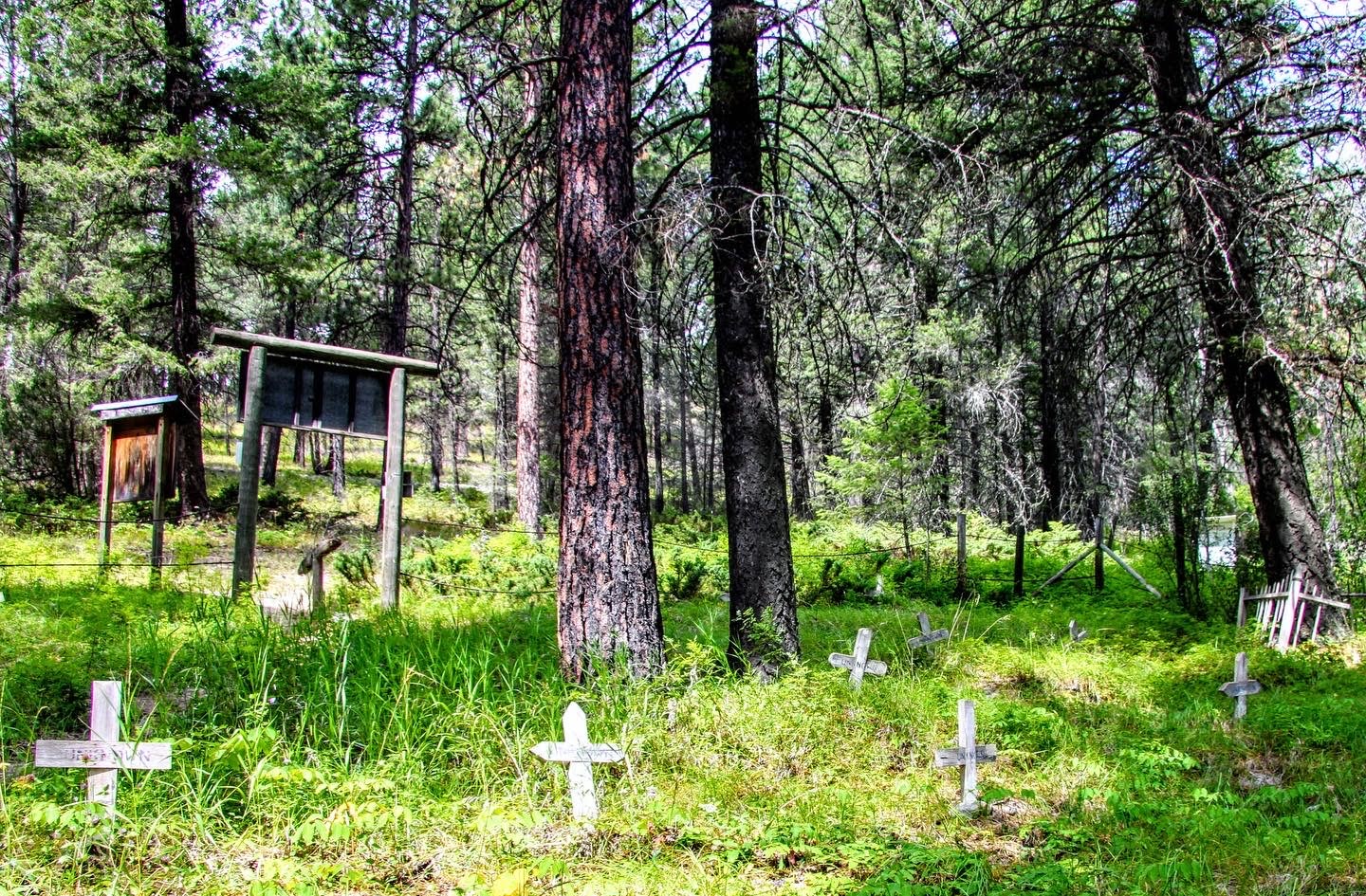 The Fort Steele cemetery is one of oldest and most storied in the Kootenays. It contains the graves of many of the East Kootenay's earliest settlers. Fort Steele has five North West Mounted Police (NWMP) members buried in the cemetery.

The fifth NWMP member to be buried in Fort Steele was Cst. Duncan Roderick MacNair. He committed suicide at Wardner in 1898 while suffering from a delirious fever. He joined the NWMP at Killarney, MB on May 18 1892. It is also known that his father lived in Edinburgh, Scotland.

To this day the NWMP graves are maintained by RCMP veterans. 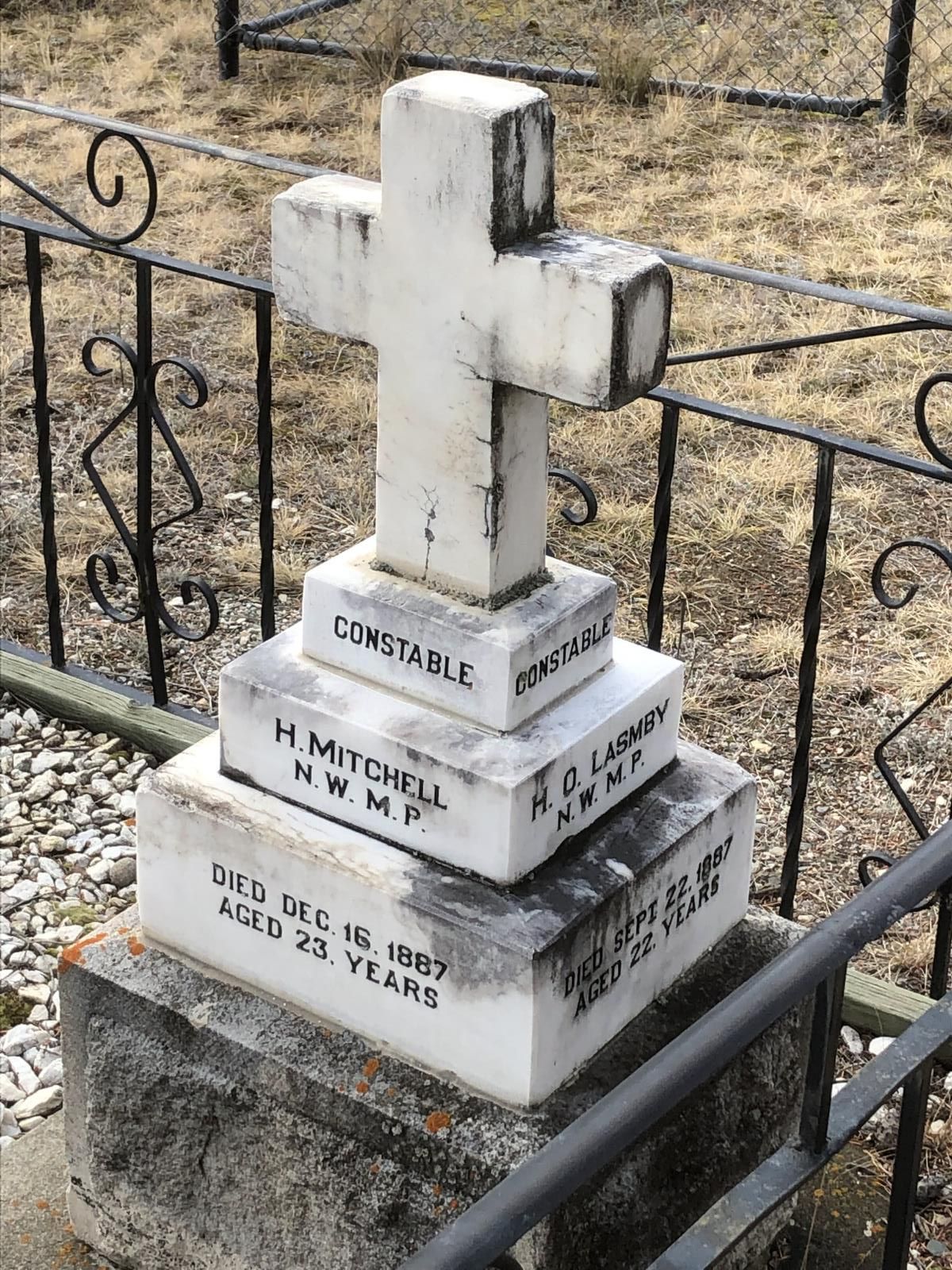 Twenty minutes south of Cranbrook is the tiny town of Moyie. In the early 1900's Moyie was the home to the biggest zinc and lead producing mine in British Columbia called the St. Eugene Mine. This quiet, serene cemetery is perched above the water of Moyie Lake and contains the remains of some of the region's earliest pioneers. 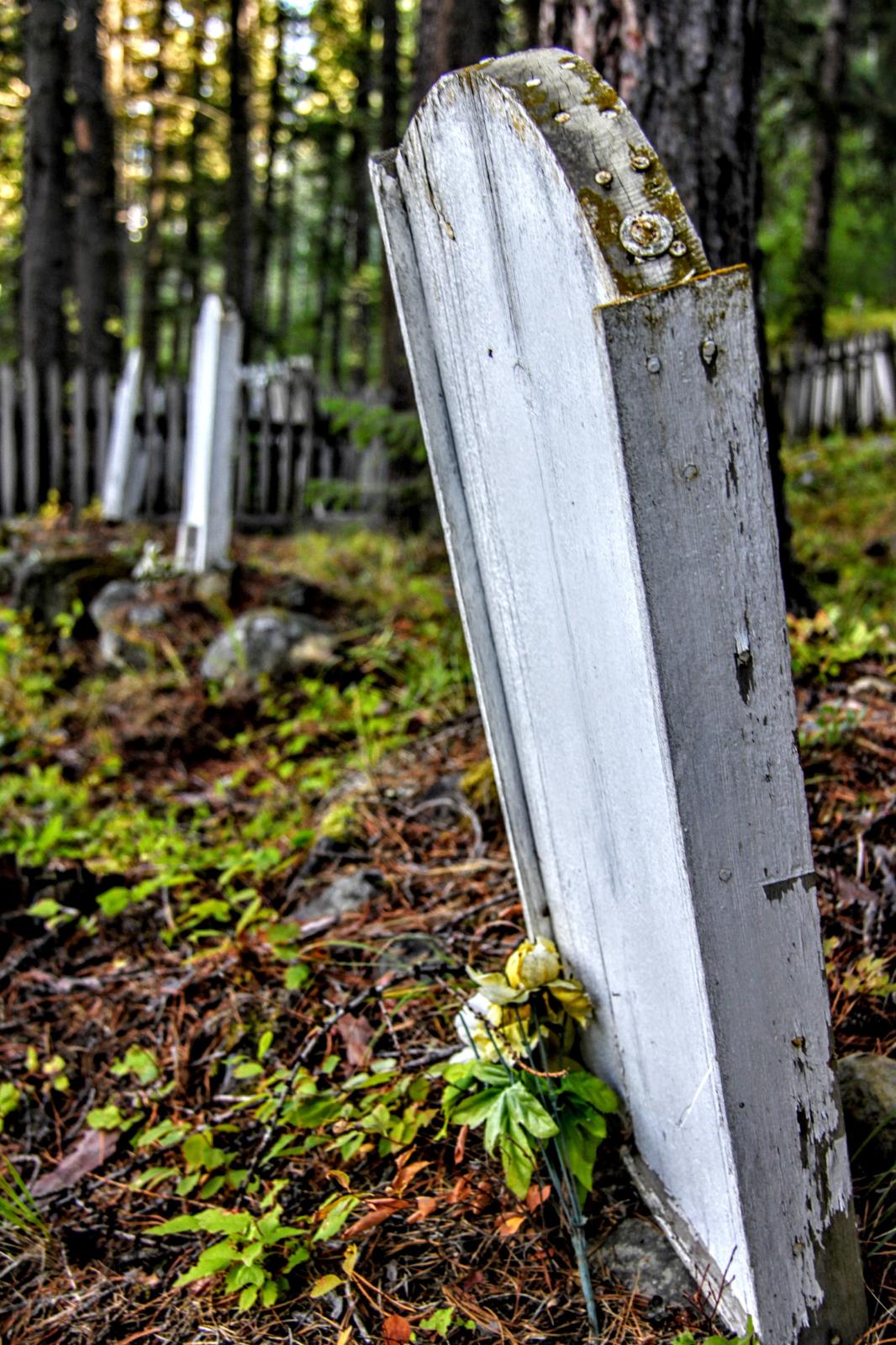 this quiet, serene cemetery is perched above the water of Moyie Lake

This is just a brief glimpse at the historical burial spots in and around Cranbrook. They all contain colourful characters and an abundance of stories from the past.

Where to Stay
Copyright © Cranbrook Tourism