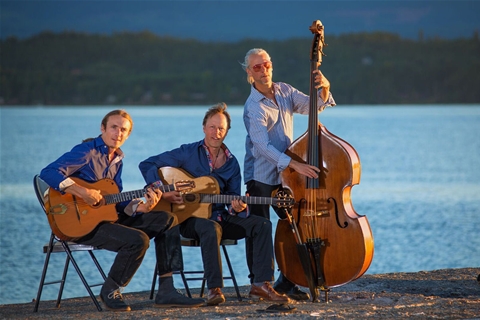 Marc Atkinson, a multi-instrumentalist/composer/arranger/producer, is one of Canada's most talented musicians. His catchy compositions, found on the self-titled CDs I, II, III and now IV take guitar beyond the usual repertoire and sound. The tunes have a fiery but elegant guitar style, infused with a catchy blend of influences. All this while still maintaining the laidback humour and casual 'good time feel' of Canada's West Coast. Atkinson's picking has been described as flawless, surprise-filled, sizzling and supremely melodic. His music is original, complex and challenging in its conception and delivery but remains accessible and absorbing. The music of the Marc Atkinson Trio good-naturedly welcomes all listeners aboard for an intriguing, exhilarating and unforgettable ride. Marc Atkinson is backed by Joey Smith on bass and Brett Martens on rhythm guitar. Marc Atkinson Trio With an impressive career spanning over two decades, the dazzlingly gifted acoustic guitarist Marc Atkinson never fails to astonish. He wears his virtuosity lightly, though, and refuses to let technical facility overwhelm the innate beauty of a melody or the emotion hiding within a lovely old tune. The late CBC Radio host Jurgen Goethe hailed Atkinson's Trio as "one of the top ten of the world's string trios." These gifted artists have been critically acclaimed and widely awarded: the second Trio recording was voted one of the top five albums in North America by Acoustic Guitar Magazine, while the Junos and the Western Canadian Music Awards have also paid their respects to this ridiculously talented six-stringer. From blindingly fast pyrotechnics to dreamy ballads, Atkinson serves up a banquet of music that draws from classical, jazz, and roots traditions. Oh, and he's a very funny presence on stage, both in terms of his droll anecdotes but also in the sly humour that can infuse his playing.

Art After School with Shyre and Kaleigh