In Search of the Dewdney Trail

You climb a steep slope to get a better view of the Crowsnest Highway or Highway 3 below. You sit and watch as passenger cars, pickup trucks, lumbering motorhomes, and diesel spewing 18-wheelers roar by at 100 km an hour or more. From this vantage point, you get a clear view of the roadway as it snakes its way along the valley floor. You're on a quest, a mission to find the remaining segments of the historic Dewdney Trail in the East Kootenay.

The best-preserved portion of the Dewdney Trail today is a stretch from Christina Lake to Paterson (south of Rossland). The trail is preserved thanks in large part to an active volunteer group who diligently work at restoring and maintaining the trail. 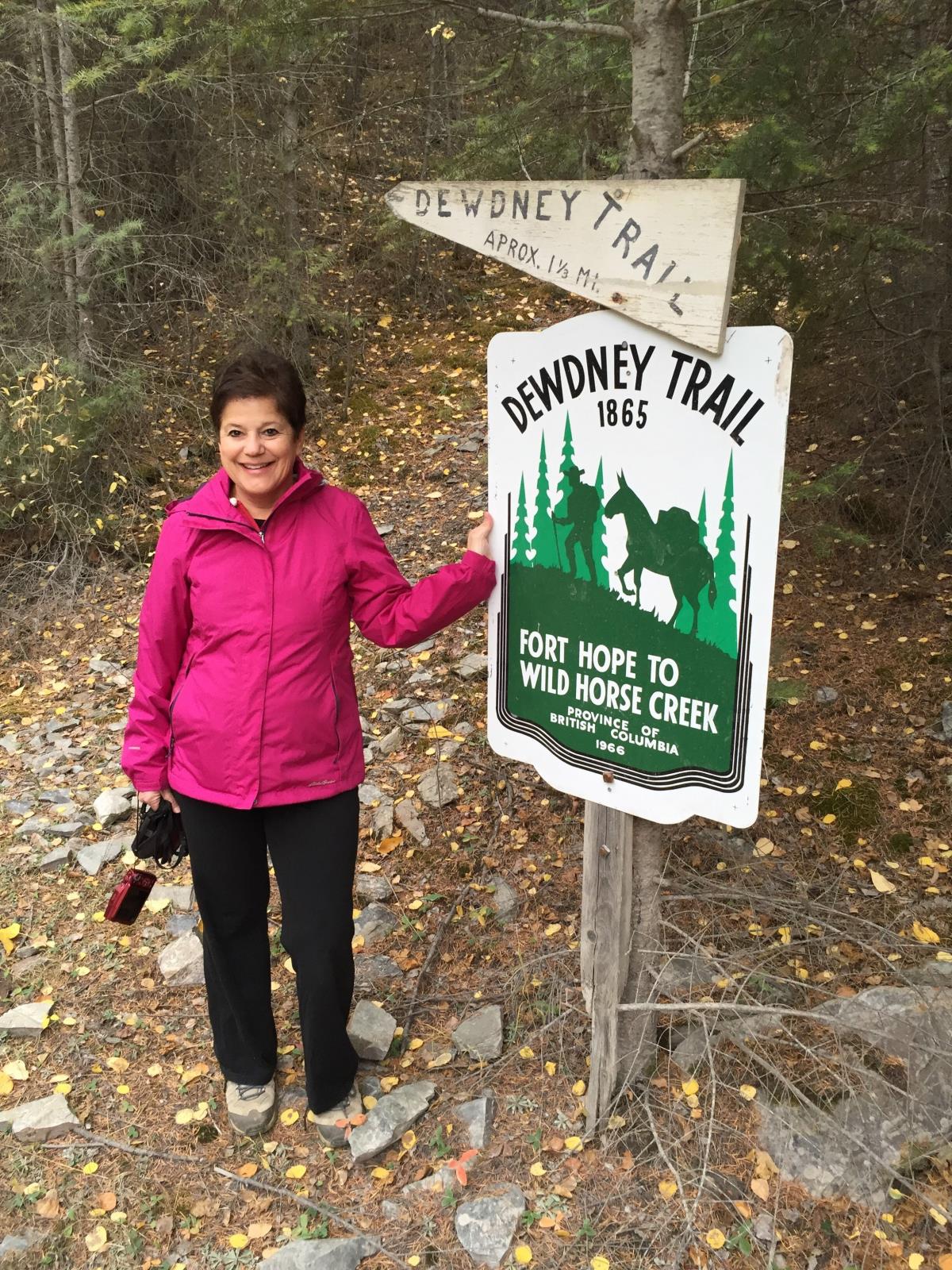 In the East Kootenay most of the Dewdney Trail has been obliterated because the footprint of Highway 3 closely follows the original path of the trail. However, if one is diligent and has a sharp eye you can still find scattered remnants of the old trail.

This photo shows what is believed is one of few remaining portions of the Dewdney Trail in the East Kootenay, south of Moyie and Irishman Creek. A hand-built rock wall and a distinctive four-foot-wide path are still evident. 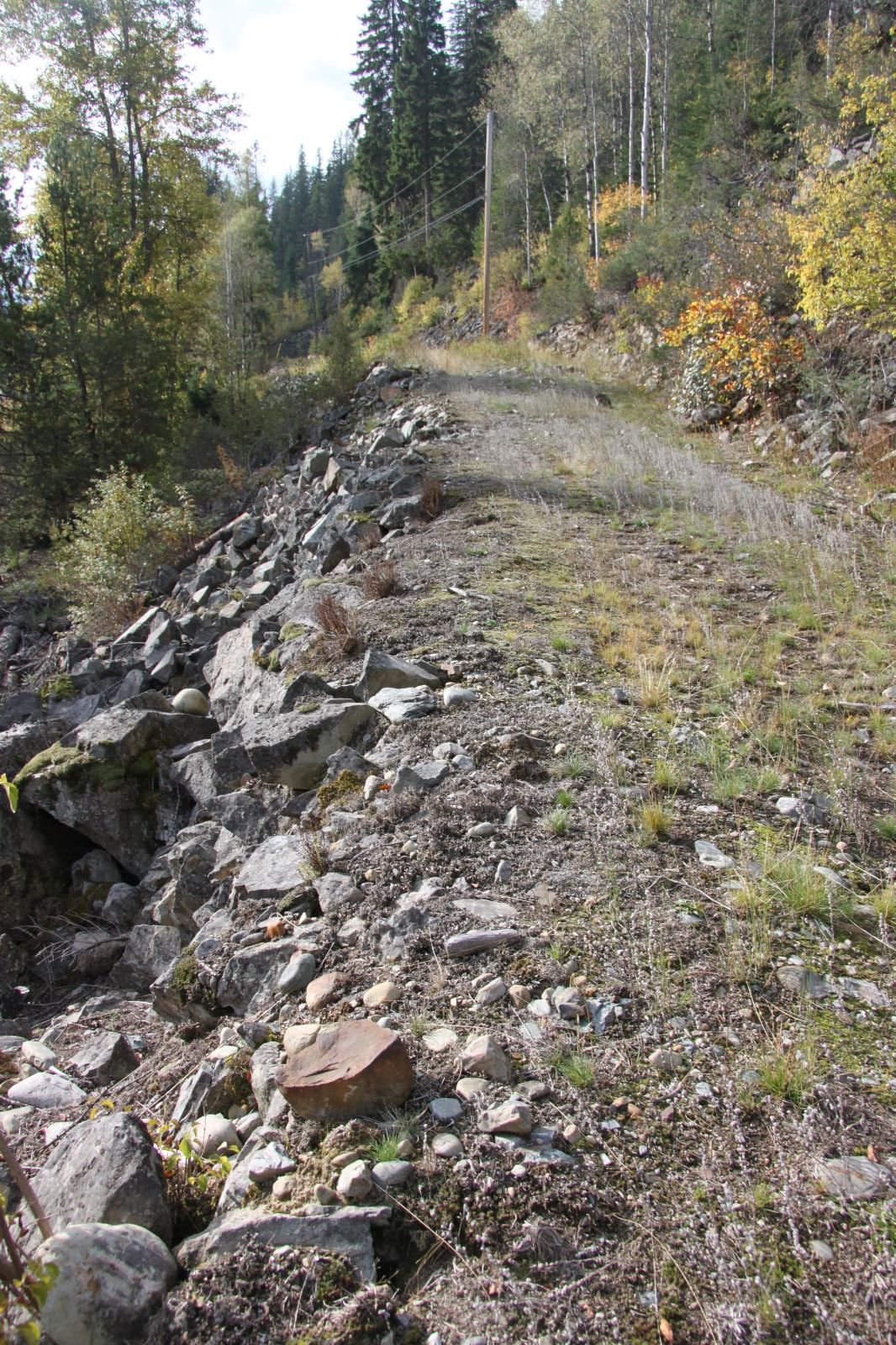 From the West Kootenay the Dewdney Trail worked its way up the pass, which is now known as the Kootenay Pass on Highway #3. Then it wound its way along Summit Creek (Photo 3) to the Creston Flats, which was an almost unnavigable soggy marshland at the south end of Kootenay Lake.

The trail headed up the Goat River, along the Moyie River, through the Peavine Valley and onto Joseph's Prairie (Cranbrook). Eventually it made its way to the Galbraith Ferry crossing (Fort Steele) on the Kootenay River 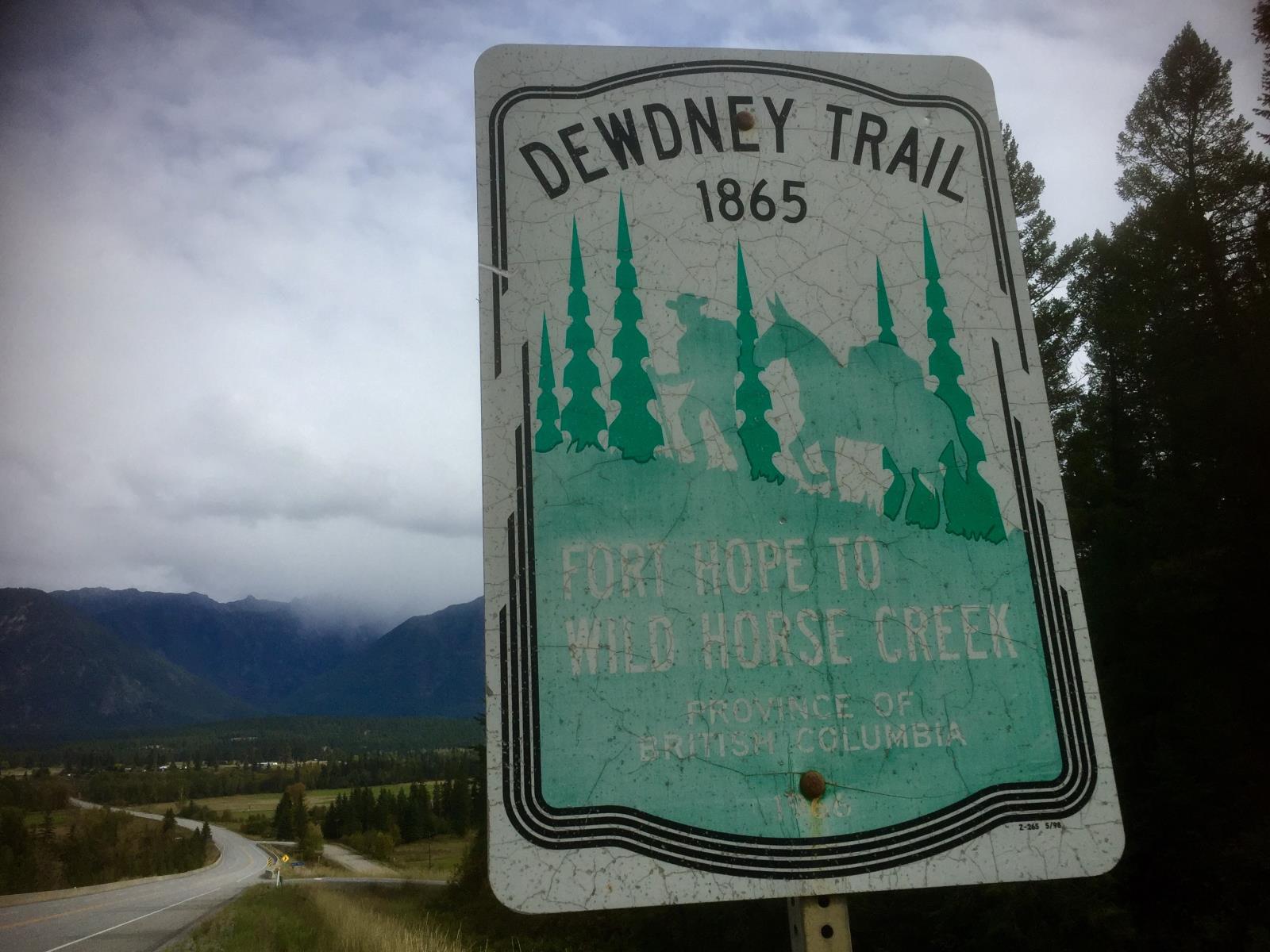 The trail headed up the Goat River, along the Moyie River, through the Peavine Valley and onto Joseph's Prairie

In 1865, the Colonial Government (soon to be British Columbia) commissioned 30-year-old English-born engineer Edgar Dewdney to complete the 720 km (450 mile) trail from Osoyoos to the Wild Horse. The trail was completed by September 1866. Dewdney hired William Fernie as his trail building foreman in the Kootenays. Famous individuals involved in the construction of the trail, in addition to Fernie, were surveyor Walter Moberly and the legendary Kootenai Brown. Moberly had worked with Dewdney to build the initial phase of the trail from Hope to Osoyoos.

Edgar Dewdney's commission was to build an all-weather four-foot-wide “wagon trail” across the southern interior of the British Colony – from Osoyoos to Wild Horse Creek. He was awarded a construction budget of $50,000. The backbreaking work was done by men with saws, axes, picks, grub hoes and wheelbarrows. Dynamite was used very sparingly because of the extra expense involved. Horses and oxen were used to pull heavy loads of dirt, rock and supplies. Construction challenges abounded; high mountain passes, soggy wetlands, steep and rugged terrain, roaring torrents and plunging crevasses all conspired against Dewdney.

“If you build it, they will come” didn't exactly apply to the Dewdney Trail. By its completion in 1866 the Wild Horse Gold Rush was already waning. Prospectors were moving onto other gold strikes at Perry Creek and the Big Bend near Golden.

Edgar Dewdney, who had been contracted to build the trail, was over budget, having eaten up $74,000 instead of the promised $50,000. Trying to curtail costs, the colonial government of the day didn't budget for the completion of proper bridges or maintenance of the trail – making future travel difficult and dangerous. Several men died in flood-swollen creeks along the newly constructed road. One mail carrier reportedly froze to death in a blizzard.

The final leg of the Dewdney Trail winds its way up the Wild Horse Creek valley from Galbraith's Ferry (Fort Steele) to the booming gold rush town of Fisherville. This last stretch is probably the best-preserved portion of the trail in the East Kootenay. Hikers and adventurers can follow a posted sign that points out the distinct trail, and they can walk along the path for quite some distance.

Back in the 1860's the miners of Fisherville were demanding a route to the Coast and the merchants on the Coast were demanding access to the lucrative mining camps in the southeast corner of the colony. Unfortunately, once the trail was built, no one had the budget or the political will to invest scarce dollars into maintaining the Dewdney Trail. Within a few years forest fires, windstorms, and mudslides rendered much of the trail impassable.

If you would like to get a glimpse of the old Dewdney Trail, head south of Moyie and stop at a roadside pullout just after crossing Irishman Creek. Here you will find one of the best remaining sections of the trail, complete with a hand-built rock wall. As the trail nears its terminus point at Fisherville above Wild Horse Creek there is also a well-preserved portion of the trail, which makes for an enjoyable afternoon hike.

Let the roar of the traffic on Highway 3 below me fade away. Close your eyes and try to imagine the fortitude and backbreaking effort it took Edgar Dewdney's road building crew to hack, carve and blast out a four-foot-wide, all-weather trail through the most inhospitable, rugged and wild reaches of the Kootenays. A historic legacy easily forgotten, but arguably well worth preserving.